The Faskari Communities of Katsina State have written to the Chief of Army Staff praising him for the improved state of security in their communities.

The Community have also described the Nigerian Army’s Super Camp IV strategy as a timely intervention.

In a letter written on behalf of the people of Faskari Communities, to the Chief of Army Staff by the Sarkin Yamman of Faskari District, Alhaji Aminu Tukur Usman, the Community appreciated the efforts of the Nigerian Army and described as “excellent officers”, the troops and commanders guarding lives of properties of the communities.

“On behalf of the good people of Faskari Communities, I hereby write to extend our appreciation over your contribution with regard to the improvement of general security situation in the entire District and the Local Government in particular.” a part of the letter read.

“The timely intervention through establishment of the Nigerian Army Super Camp IV is indeed commendable and well appreciate by us.”

The Community also thanked the Chief of Army Staff, Lt. General Tukur Buratai for his approval of payment of compensation to farmers whose farms had been affected by the Nigerian Army’s Super Camp.

They also thanked him for the ongoing rehabilitation of the Health facility in the community.

“Similarly, we also recognise and appreciate your approval in the payment of compensation to the farmers whose farmland/ crops were affected by the work in the Nigerian Army Super Camp (IV) and the ongoing rehabilitation of our Health facility as an implementation of corporate social responsibility under your good office.”

See the full letter below: 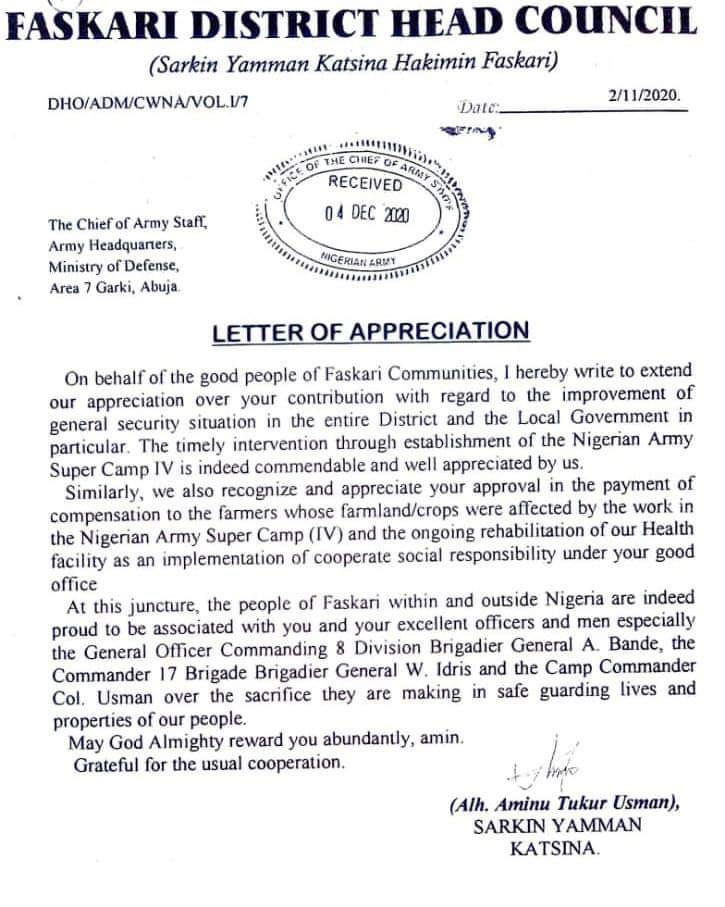 No Room For Violent Protest, Gathering In Lagos - Police PRO

No Room For Violent Protest, Gathering In Lagos - Police PRO

Bago The Man for The Job: Why Niger Must Not Compromise Its Future For Cheap Coins

Bago The Man for The Job: Why Niger Must Not Compromise Its Future For Cheap Coins